The New York Mets began playing baseball in 1964 at Shea Stadium in the Queens Borough of New York City. The New York Mets played second fiddle to the Yankees for years until the 1980s, when the Mets became the dominant team in the city. The 1986 defeat of the Boston Red Sox to win the World Series, in one of the most memorable World Series ever, put the Mets on top of the city for the first time and grew the Mets fan base in NYC and all around the United States. The Mets' previous field, Shea Stadium, was originally built as a multi-purpose stadium and did not have very good seating for baseball games. In 2009, after three years of construction, Citi Field was opened as the brand new baseball stadium to the Mets. Former NYC mayor Rudy Giuliani was the force behind the building of both Citi Field and the new Yankee Stadium as he passed a $1.6 billion plan to create new stadiums for both the Mets and the New York Yankees. A college game between NYC local St. John's versus Georgetown was the first official game played on Citi Field on March 9, 2009. The Mets opened play on this field just a couple of weeks later versus the San Diego Padres on 04/13/2009. Besides the Mets games, Citi Field was host to the 2013 MLB All-Star game festivities.

The original capacity at Citi Field was approximately 41,800. After a small addition in 2012, the current capacity for Citi Field is at 41,922, with certain games able to occupy a few thousand more fans. The record attendance was for the 2013 MLB All-Star game on 07/16/2013 as the American League defeated the National League 3-0 in front of a crowd of 45,000+ in attendance. Many Mets fans love the small size relative to the old Shea Stadium. Shea Stadium held 57,000+ fans regularly and was geared more towards a football field-type atmosphere with cramped seating and very few amenities. The new Citi Field offered a much better experience and is being lauded as the "perfect ballpark" by some fans. 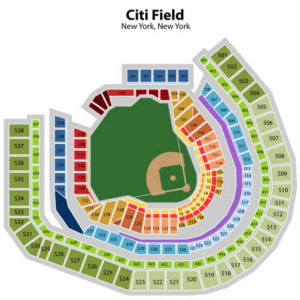 The field dimensions of Citi Field tend to be slightly longer than Shea Stadium, but having less foul ground for the batters makes up for it. The current Citi Field field dimensions are 338 feet in the left and right field and 410 in centerfield. The Citi Field ballpark is more of a "pitcher-friendly" park as the spacious outfield lets outfielders track down balls that would be hits in many other ballparks around the league.

One thing that gets high marks from all fans that have been to Citi Field is the amenities. Some even say that the Citi Field amenities are among the best in Major League Baseball as they cater to fans of all ages. Here are some of our favorite things at Citi Field.

New York City is famous for its food, and the food at Citi Field does not disappoint. Compared to the rather small selection at Shea Stadium, Citi Field food and beverage has something for fans young and old. Here is a list of our three favorite places to eat at Citi Field. Pat LaFrieda's Steak Sandwich - While Philadelphia may be home of the cheesesteak, Pat LaFrieda's steak sandwiches don't take a backseat to any sandwich in all of MLB. These large steak sandwiches are among the best in the big leagues and are a "must-have" for anyone visiting Citi Field. Shake Shack - The famous Shake Shack has some of NYC's best burgers. The Shack burger is an NYC classic, and the Shack-Cago Dog is among the best type of hotdog in all of baseball. Top either of these off with their signature shakes, and you have a classic comfort food meal. El Verano Taco - When it comes to Citi Field food, many don't think of a Mexican-style restaurant. Danny Meyer's El Verano Taco hits the spot as one of the best food places at Citi Field, though. With tacos, carnitas, quesadillas, and much more Mexican food, this place is a fan favorite for those attending a Mets game.

One of the newer ballparks in all of baseball, Citi Field also ranks among the best. While the Mets may still be New York's second most popular team, Citi Field is built for a champion. The crown jewel of Citi Field starts as soon as you enter the stadium as the Jackie Robinson Rotunda is the most unique entrance out of all of the ballparks in MLB.