Replacing the infamous Tigers Stadium in 2000 is Comerica Park, located in Downtown Detroit. As one of the "newer" parks in all of MLB baseball, Comerica Park broke ground on this $300 million structure in October of 1997 and finally opened on 04/11/2000. The Comerica Bank Company agreed to pay $66 million over a 30-year contract for the naming rights to the stadium. This stadium, along with the building of the Detroit Lions' new Ford Field, was part of the revitalization of downtown Detroit, which has been hit hard by the economy. With the Tigers being a franchise with a rich history, Comerica Park built the park around respecting the historic franchise. Monuments to Tiger greats Ty Cobb, Al Kaline, Hank Greenberg, and others are just some of the park features. The park opened on April 11, 2000, as the Detroit Tigers hosted the Seattle Mariners. With snow weather conditions, more than 39,000 fans braved the 34-degree temperatures to watch the Tigers defeat the Mariners 5-2. The largest American Flag in the nation was unfurled (150 x 300 feet.) as the crowd and teams sang the national anthem.

Since its opening, Comerica Park has hosted many major events outside of Detroit Tigers baseball games. Jimmy Buffet, Paul McCartney, Kid Rock, Bruce Springsteen, the Rolling Stones, and Detroit native Eminem are just a few of the many concerts held at Comerica Park. The largest attendance was a two-day event held on 09/02/2010 and 09/03/2010 as Eminem and Jay-Z performed back-to-back concerts. Besides this, the NHL has hosted several outdoor hockey games at Comerica. The largest attendance at the stadium for a baseball game was 45,280 on 07/26/2008 as the Tigers hosted the Chicago White Sox. Over the past few years, the Tigers continue to alter the size of the baseball stadium to accommodate their fans, and the current Comerica Park capacity is 41,680. 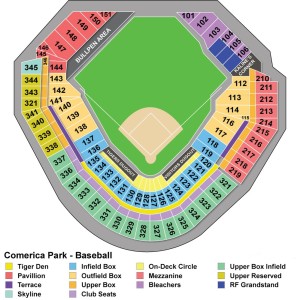 When it comes to being a hitter's park or pitcher's park, Comerica is pretty equal as both a hitter and pitchers friendly park. Being ranked between in the middle of the pack year and year out, Comerica Park is well received by both hitters and pitchers. Comerica does tend to favor being a hitter's park as temperatures rise in June, July, and August as more than 1/4 of the Tigers' home games are played in the colder months of April, May, and October. The Field Dimensions for Comerica Park are 345 feet in Left Field, 420 feet in Center Field, and 330 feet in Right Field. Center Field in Detroit is one of the farthest in all of MLB but pales in comparison to the old Tiger's stadium 440 feet center field wall.

While Comerica is one of the newer baseball stadiums in all of MLB, it pays tribute to the past with many classic amenities. Here are just a few of the great things that you can find at Comerica. Carousel and Ferris Wheel - All MLB baseball stadiums must now appeal to the youth. Comerica adds something for kids as it has installed a Tiger themed carousel and a baseball-shaped Ferris wheel to the park. Craft Beer Stand - While maybe not an amenity to all, Detroit may have the best array of craft beers at their stands in right-center-field. Michigan offers some of the best craft beers in America, and many of them are on display at Comerica Park. Monument Park - As discussed earlier, Comerica Park offers plenty of monuments and sculptures which pay homage to their past. Besides the monuments of Tiger greats in the centerfield, the park is filled with many more tributes to players from the past.

As far as Comerica Park food goes, they do not rank very high on the list of MLB baseball stadiums. With this being said, they still have some very good ballpark food for baseball enthusiasts. Here are three of our favorites.

The Beer Hall - The beer hall has a huge selection of beers and some great-tasting bar food. While it is a bar, it is still kid-friendly and open for all ages. Burgers and sandwiches are the staples of this restaurant. The Brushfire Grill - Right in the Ferris wheel area, a popular spot for families, is the Brushfire Grill. This outdoor picnic area is what you would expect from a typical picnic, with burgers, hot dogs, and BBQ dominating the menu. Leo's Coney Island - Perhaps the best tasting food at Comerica Park is the Coney dogs available at Leo's. While the specialty is Coney hot dogs, they are one of the few Comerica Park food stands that offer healthier items for those looking to avoid the staple ballpark food.

Comerica Park is a unique ballpark in that it has an old-time feel while offering newer amenities. While the food is just fair at best, they make up for it with their large beer selection. The atmosphere of Comerica Park is one of the best in baseball, as Tigers fans are very loyal to their hometown team.