Replacing Cinergy Field in 2003 as home of the Cincinnati Reds is the Great American Ballpark. The Reds, who called Cinergy/ Riverfront Park home from 1970-2002, had great success in their previous ballpark, but felt that this older stadium lacked the amenities necessary for a professional sports franchise. Part of the big problem was that the Cincinnati Reds and Cincinnati Bengals both occupied Cinergy Field and this was a big turnoff to fans and professional free agents for the teams. In 1996 Hamilton County, Ohio voters passed a ½ percent sales tax to build brand new stadiums for both the Reds and the Bengals. When constructing the new ballpark, the Reds organization wanted a very up close and personal experience for baseball fans, as their former stadium was more oriented towards a football stadium. The Great American Ballpark offers that and more and is one of the “most hitter friendly” stadiums in all of MLB due to the small compact field. The Reds christened this field on 03/31/2003 as they played their arch rivals the Pittsburgh Pirates. Baseball Hall of Famer Ken Griffey Jr. was the first player to get a hit in this new baseball stadium.

Unlike many of the other baseball stadiums that we have reviewed, the Great American Ballpark Capacity has stayed relatively the same since its opening in 2003. From 2003-2007 this ballpark held 42,271, while in 2008 they added just under 50 seats and are at their current capacity of 42,319. The park’s attendance record took place during Game 3 of the 2010 National League Division Series against the Philadelphia Phillies

Known as the “launching pad” on hot summer days due to the amount of home runs hit at this baseball stadium, the field dimensions of Great American Ballpark are very kind to both right-handed and left-handed batters. With small gaps (Left Center 379 ft. and Right Center 370 ft.) this stadium has become a favorite for hitters. Down the line the park is a tad smaller than the major league average with Left field being 328 ft. and 325 ft. in Right field. Center Field is a very traditional 404 ft. from home plate. Great American Ballpark Amenities 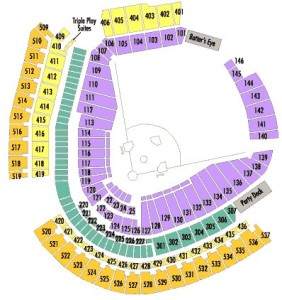 Cincinnati is known for its famous Cincinnati Chili, while this is a great option at the ballpark there are also several other great places to eat. Here is a look at our three favorite places to eat at Great American Ballpark. The Machine Room- If you are lucky you can grab some food at the Machine Room while watching the game; unfortunately this place is almost always booked for Reds games. Named after the “Big Red Machine”, the Reds powerhouse team of the 1970s, this place serves classic sports bar food at a reasonable price. I recommend getting one of their great appetizers and pairing it up with a sandwich of your choice, I like the Ohio sandwich, and enjoying the game from your table. The Machine Room does have a minimum tab if you are sitting a watching the game so be prepared to spend some money. We went there on a Thursday and it was $75, I think it doubles on Friday and Saturday. Frisch’s- An Ohio classic is Frisch’s Big Boy. While this establishment peaked in popularity in the 1980s, they still offer excellent food at the baseball stadium. Frisch’s at Great American Ballpark serves classic hamburgers and fries that are classic baseball food. Born in Ohio, we tend to favor the tradition of Frisch’s over Pete Rose Day

the food, as it is good but not spectacular when compared to other ballparks. The Riverfront Club- If you are in to fine dining at a MLB park than eating at the Riverfront Club is a great option. The food here varies from traditional ballpark food to more fine dining. The one drawback that this place has is it is not in the open and it has an enclosed feeling if you are watching the game. I recommend stopping here before the game and then trying one of our other choices later in the game.

While I have many fond memories from the old Riverfront stadium as a kid, the Great American Ballpark is one of my favorite new stadiums in MLB. This new stadium is so compact and tight that even the worst seats beat some of the better seats at Riverfront.