Replacing arguably one of the worst baseball stadiums of all time, the Houston Astrodome, Minute Maid Park is one of the most unique ballparks in baseball.

Otherwise known as “The Ballpark at Union Station” and “Enron Field,” Minute Maid Park has been home to the Astros since 2000. As Houston’s first retractable roof stadium, this field allows fans to enjoy outdoor baseball games when the weather is mild and indoor games when the weather is too humid. After years of playing on the notorious Astroturf at the Astrodome, Minute Maid Park was built with natural grass. As a former home to Houston’s Union Station, this park pays homage to its past location as behind the left-field wall is a railway. The Astros’ first game at Minute Maid Park, which was then Enron Field, took place on 03/30/2000 as they defeated the defending World Series Champions, the New York Yankees, 6-5. 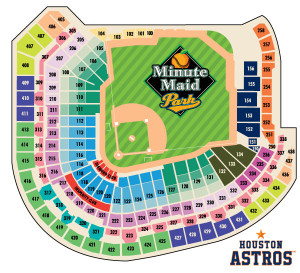 Perhaps the most “pitcher-friendly” ballpark of all-time, the Houston Astrodome, Minute Maid Park is more of a “hitter’s ballpark” as it has very short dimensions down the lines at 315 ft. in Left Field and 326 in Right Field. With that being said, it has the most unique centerfield in the majors and perhaps MLB history. At 436 feet and with a 90-foot area on an incline, a home run to center field is the farthest in the big leagues. Besides the hill in center field and the short lines, the left-center field features the “Phillips 66 Home Run Porch” hanging over the field.

While the theme of Minute Made Park is the former train station that used to occupy the area, there are plenty more great amenities at Minute Made Park. Here are some of our favorites.

While its name comes from the juice company, Minute Maid Park also has several great spots to eat at within their ballpark. Here are the top three choices for Minute Maid Park Food: FiveSeven Grill - Named after two of the most famous Astros of all time, Jeff Bagwell #5 and Craig Biggio #7, this restaurant is one of the nicest in all of Houston. With dishes such as steak, chicken, and tilapia, this is a great full-service restaurant inside Minute Maid Park. Larry’s Big Bamboo - Named after former Astros manager Larry Dierker, the Big Bamboo is a favorite for fans who visit Minute Made Park. Known for some of the best wings in all of MLB, Larry’s Big Bamboo has tons of “comfort bar food” that hits the spot. El Real Tex-Mex - Houston appeals to a wide range of Latino fans with the El Real Tex-Mex stand in Section 132. Known for its awesome fajitas, tacos, and quesadillas, this place is a Mexican food lover’s paradise.

After years of bad reviews from the Houston Astrodome, Minute Made Park is a favorite among Houston Astros fans. Quite possibly the most unique park in all of baseball, this park breaks the mold of some of the “cookie-cutter” ballparks built in the decade before it was constructed. The Union State train theme and Tal’s Hill in centerfield make this park a great visit for anyone in the Houston area.