The nation’s capital was home to MLB baseball for the first time in over 33 years as the Washington Nationals came to Washington DC in 2005. After years of poor attendance and bad baseball teams, Major League Baseball decided to move the Montreal Expos to the nation’s capital and renamed them the Washington Nationals. Leaving Olympic baseball stadium due to poor attendance and general disinterest by most of Montreal, MLB purchased the franchise and moved them to RFK stadium for three years before opening Nationals Park in 2008. Breaking ground in 2006, Nationals Park baseball stadium was ready for the 2008 baseball season. While the Nationals started with a few losing years, back-to-back #1 draft picks of pitcher Stephen Strasburg and outfielder Bryce Harper brought hope to this young franchise. Nationals Park has seen great attendance numbers with this new young talent ever since its opening in 2005. The first game at Nationals Park was a college game as local college George Washington University defeated Saint Joseph’s 9-4 on March 22, 2008. The Washington Nationals opened up just eight days later, on March 30, 2008, as they defeated the Atlanta Braves 3-2 on a Ryan Zimmerman walk-off home run.

Nationals Park’s Capacity is currently at 41,418 after the Nationals decided to remove some of the upper deck seating areas so that fans could get a better view of the Washington Monument and other historical landmarks that are in view for many areas of the upper deck. The all-time record for a single game attendance is 45,966 in a game on October 12, 2012, versus the St. Louis Cardinals. As a new ballpark, the Nationals baseball stadium is rated as one of the best in the league. With great views of the nation’s capital from the upper deck and many great lower-level seats, National Park gets very high ratings from visitors worldwide. 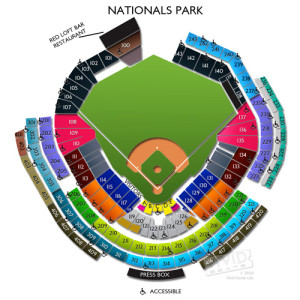 The Nationals is known as a “pitcher’s park” as it has yielded the least amount of home runs during the 2013 MLB baseball season with just over 0.6 home runs per game. While the actual dimensions of Nationals are pretty typical (337 ft. Left Field, 402 ft. Center Field, 335 Right Field ), the wind and humidity for most games tend to favor a lot of fly ball outs that would be home runs in other ballparks.

The amenities at Nationals Park are among the best in Major League Baseball as the field has been host to many of the most powerful people worldwide who visit the White House every year. Here are some of our favorites.

While the Red Porch is the signature restaurant at the Nationals baseball stadium, several other great places are to eat. Here is a list of the three best places to eat at Nationals Park as rated by our staff.

As far as MLB stadium ratings, Nationals Park gets high marks around the board. With many great amenities, great food choices, and the ambiance of being within walking distance of the nation’s capital, this ballpark has drawn great reviews from Nationals fans and visitors from around the globe.